Today I have been banned from commenting or posting on Facebook for 24 hours.

What did I do? I violated their standards or in their words... 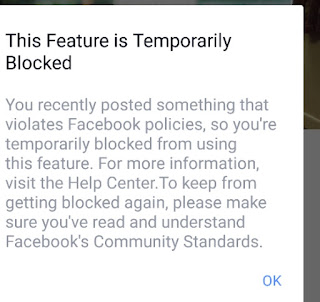 How did I do this? Well that was up to me to find out. I trawled through my posts and found a share from IMDB for Peter Greenaway's film "Drowning By Numbers" .

To that you go to IMDB , check in to wherever you want to be and make a comment.

That was what I did.

The image below is what I think (I can cannot be certain) transgressed their rules. If you zoom in to the lady in the pool, there is a suggestion of a female nipple.


There was an opportunity to defend the post and say what had happened. I did this but Facebook just said I couldn't submit my response. See below. It's almost Kafkaesque the fact that there is no option to discuss this, and it's possible that this has happened to lots of people. 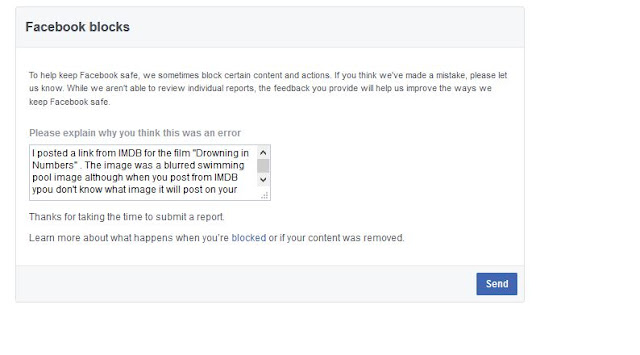 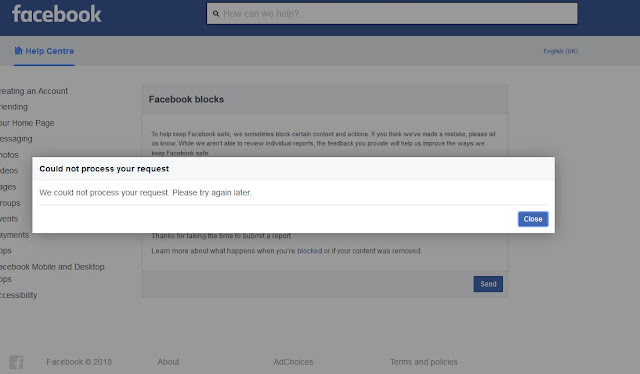 I accept that we don't want anything unacceptable but I have subjected to skinned and mutilated animals, guns and knives being used on people, violent hate videos, anti Muslim, anti immigrant and inordinate profanities which all seem to be acceptable even when I complain.

I know mistakes are made but the can't be rectified if there is no mechanism to rectify those mistakes.

I know Facebook is "free" it's paid for by the barrage of advertising, and I accept that, it's like adverts that keeps commercial television and radio free.

I'm not going to kick up a fuss, just writing this to share my exasperation.

Why is the female nipple seen as such a threat, as Dave Allen said, what if they had chosen the nose to be so indignant about.

If you were to answer the door naked the first time I'd be surprised, the tenth time it would be "Coffee, milk no sugar".

This is like the version of Microsoft Excel that had a hidden built in Flight Simulator. No woner it needed so many discs to install. Total bloatware.

Then we have things like OneDrive and Google that connect to "The Cloud" to continually back up your computer which means that your machine is much slower especially if your internet connection is not that fast.

And another thing , why are cookies used ofr security. Cookies are fine for transient information, I don't mind seeing ads for cake if I've been searching for cake, but when Facebook contially asks me to remember my password in tree places every time I log on , as well as asking me if it can send Facebook notifications to my desktop before blacking out my screen before logging on. Because I do things with web sites I always clear cookies and history to make sure I'm working with the latest version.

Why can't sites store these preferences with other things like your name?

One the one hand we're continually warned about security, next were being told to let browsers remember our passwords and even stay logged in for quicker access (that's PayPal)

Right rant over and time for work.

I have not had a rant for a while, in fact it's over a year,  and that's what I set this particular blog up for as I prefer to be positive, but every so often I want to rant about the bad things in this world. I was originally going to title this FVCK STUDENTS, but thought that may be even more inflammatory.

Don't get be wrong, I am not getting at students, in Newcastle they contribute to the economy, yes they can be annoying , congregate at the front of an otherwise empty bus or in front of a cash machine that you want to use etc etc

Basically its a lot of things, the most in your face being the continually erection of new Student Cell Blocks. Almost everywhere there is somewhere that can be built on these are going up. Now I wouldn't mind if these were being put up by councils for the benefit of students, but they're not , they charge students £500-£600 a month to stay here. This is private "enterprise" with the collusion of the government treating the students as cash cows. This is on top of the student loans which were introduced by Nu--Labour, then hiked by the Tories and LibDems , all people who had their education paid for (by the state or parents) showing their economic incompetence in education.

Now the government are talking about capping Student loans ... because ... the cost of recovering unpaid loans is become a burden. The thing is because wages have stagnated students can't even get a job that would enable then to repay the loan , let alone actually live.

Students should not be viewed as cash cows, but the current model , the government lends the students money (taken from the taxpayer), that is then paid to private "enterprise", then when students can't repay then the taxpayer loses out again.

I know my views are simplistic, but we should be building social housing (council housing with affordable rents not "affordable" housing) , student accommodation should be also similarly costed, and education should be FREE funded by the taxpayer.

Instead we have an economy where money is leaked away into offshore accounts while the country's infrastructure crumble....and I won't mention leaving the EU.....

Some of Mine and Other Blogs